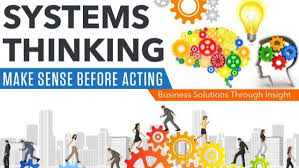 Platform of the OD fix

Control apparatus designed to identify and avert deviations in system behavior before they would otherwise take place is called feedforward or preventive control. Nothing else can lead to or support a flourishing ecosystem.

As a rule, control systems always control systems best using a feedforward (or open-loop) controller combined with a PID module for trim. The feed-forward value alone can often provide the major portion of the controller output. Since feed-forward output is not affected by process instrumentation feedback, it lags in responding to large, sudden, novel disturbances. It can never promote oscillation to instability. The dynamics of a feedforward process controller encompasses the requisites for a successfully-run project.

The benefits of feedforward control are significant. Feedforward is stable. Control accuracy can be improved by an order of magnitude. Energy consumption is substantially lower. It reduces wear and tear on equipment (people), lowers (people) maintenance costs, increases reliability and reduces hysteresis.

Feedforward controls require timely, reliable information that is rarely available as a normal part of system operations. Providing control-worthy feedforward information requires an effort dedicated to that end. It always has to deal with undiscussables.

Since the mechanisms of action of feedforward control are expressed in mathematical physics, the technology entails a computer-based dynamic simulation facility that can visit the future of the behavior of the system before it arrives there. Equipped with the dynamic model of the system and its disturbances, it is easy to project the project trajectory.

The benefits of feedforward control are significant and justify the extra time and effort required to implement the control technology. Control accuracy can often be improved by as much as an order of magnitude. Energy consumption by the feedforward control system and its actuators is substantially lower than with other controls. Stability is enhanced such that the controlled system can be built of lower cost, while still being highly accurate and able to operate at high speeds. Other benefits of feedforward control include reduced wear and tear on equipment, lower maintenance costs, higher reliability and a substantial reduction in hysteresis.

In the case of biological feedforward systems, such as in the human brain, knowledge or a mental model of the plant (body) can be considered to be mathematical as the model is characterized by limits, rhythms, mechanics and patterns.

As stated above, control system design always performs best through a feedforward (or open-loop) controller combined with a PID module for trim. The feed-forward value alone can often provide the major portion of the controller output. Since feed-forward output is not affected by process instrumentation feedback, it lags in responding to large, sudden, novel disturbances. Thereby it can never promote oscillation to system instability as feedback systems can.

The PID controller is appended to the feedforward function to respond to whatever difference or error remains between the forecast made by the model and the actual value of the process variable (PV).

Feedforward controls require timely, reliable information that is rarely available as a normal part of institutional operations. Providing control-worthy feedforward information requires an effort dedicated to that end and it is seldom ready at hand. It may not organizationally neutral.

Since the mechanisms of action are expressed in mathematical physics, the approach uses a computer-based dynamic simulation facility that can visit the possible futures before they arrive. Equipped with the dynamic model of the controlled system and its disturbances, it is easy to project the trajectory of its behavior. You can plot where the project will go by knowing the procedures it intends to execute.

Feedforward control is mathematically intense. Every result of control action immediately goes as input into the design of the next control cycle. Using a set of additional process variables not ordinarily used in conventional system control, today’s feedforward control systems, relying heavily on the calculus, are computer-driven.

To engineers, a beautiful feature about feedforward control is that it makes direct use of the proving-ground software developed to validate the candidate fixes. In Plan B, the model of the process and its disturbances is part of the design release regimen. You get the best for less.

Feedforward control systems are disturbance prevention techniques that look ahead in time to spot trouble brewing on the horizon and, anticipating trouble’s arrival, take commensurate preventive action. Warning everyone that the dam above them has just broken, for example, gives time for potential victims to scramble to higher ground.

Plan A uses a feedback control system using fixed algorithms that never adjust to reality. It reacts to disturbances with crisis management after they arrive and cause damage. Plan B is a feedforward control system that, looking ahead, smothers the little disturbances before they can grow into calamities. Basically, Plan A social systems in OD cannot acquire Plan B ideology and continue operating on feedback control at the same time.  Likewise, Plan B cannot exist while using Plan A feedback control techniques are being used on the organization.

To engineers, the functional distinction between the control theory employed by Plan A, feedback, and the control theory used to implement Plan B, feedforward, explains practically everything happening in the operational reality. The multiplicity of details relating to system functioning that occupy the attention of most observers are effects and not causes. Remember, operational consequences no not point to their causation. If they did, there would be no such thing as a career politician.