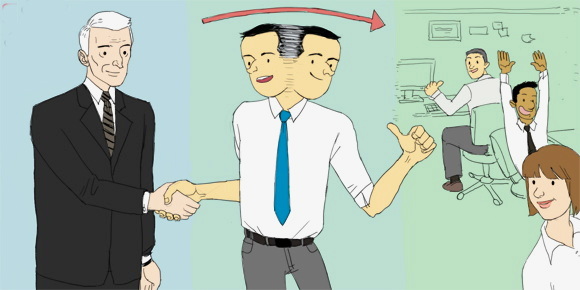 The literature published about the man in the middle (MitM) is mostly about the middle manager who is not the MitM featured on this website. While this role meets many of the criteria of the authentic MitM, the middle manager is on the opposite side of the great divide that separates social status by authority (opinion) and social status by positive social power (performance), merit. Middle managers operate within the social behavior envelope preoccupied with obtaining more and more authority and, since there is a limited supply, it is a continuous zero sum competition, a rut. The hero MitM of this sociotechnology is preoccupied with performance in attaining positive goals – for which there is no fixed upper limit.

The only tools possessed by authoritarians to reach their goal, keep what you have and gain more authority, is the legal impunity to punish their constituency in any way it can devise. That is, authority action commands always involve threats of punishments for not behaving in the specified way. It is always framed as a subordinate duty and therefore the constituency has no responsibility for results.

The MitM, a foreman/keystone/front line leader, has the social power to take responsibility for social goal attainment and make good on his promise. The organizational workforce that makes good things happen reports to him in a superior/subordinate relationship. The recorded history of middle management is revealing.

“Early in the twentieth century, advances in technology permitted cheap production on a very large scale. Middle management was the key actor that facilitated the remarkable growth and efficiency of the American economy. Without middle management’s coordination of production and distribution, firms could not grow big enough to take advantage of the technological potential of mass production and low unit cost. Middle managers were heroes to the owners.

The hero image gave way in mid-century to the Organization Man, whose careers were stable (or boring, as popular books and movies represented) and predictable in the rise to executive positions. Like everything else, the role of middle management has changed over time. Teams are more important today than they used to be, and middle managers coordinate the work of teams and mediate between them.

The current view of middle managers is that they are “intrapreneurs,” changing jobs frequently and working across the boundaries of small networked companies. In spite of downsizing and delayering, the percentage of the labor force that is managerial has shown a small but steady increase over time. Many firms may be laying off managers, but other firms are hiring them to take up the slack. They often job-hop within a division or an organization, but overall, they enjoy relative employment stability, even though the threat of lay-offs is eternally present. Since the year 2000, the median pay of middle managers has stagnated.

The work of middle management is intrinsically interesting. There are opportunities to use existing skills and learn new ones. Work is an end as well as a means, and the work is an important component of personal identity. Regardless of how they feel about the changes in the larger social environment, most middle managers are committed to their work and to their teams. They are not, however, loyal to the top executives, whom many consider to be self-serving and corrupt. They are focused on their day-to-day jobs and are thinking about what they will do if laid off.

The continuous organizational turmoil that exists in today’s organizations creates an environment that seems chaotic and out of control from the perspective of middle management. Accordingly, emotional stress is rampant. Middle managers don’t climb the ladder into executive positions as often as in the past. Increasingly, executives are brought in from outside, so career paths for middle managers are often limited.”

Why is middle management so difficult?

“Middle managers have to communicate company goals and strategic changes to their team. But it can be impossible to get everyone on the same page. Middle managers may have to handle backlash and pushback from lower-level employees. But, given their position in the organizational structure, their hands are often tied.

Middle management occupies what sociologists call a ‘contradictory-class location.’ Middle managers have higher wages and more autonomy than the workers they manage, but they earn less than their superiors and don’t get to make big decisions. Middle managers often have to enforce strategic policies from the top—ones they didn’t develop—on subordinates who object to those new policies. Basically, middle managers have the stressful task of absorbing the discontent of both sides, invariably falling victim to both depression and anxiety.

Internalizing failures is one cause why those in this particular position are the most anxious and depressed. For those without decision-making power, blaming external factors can be a helpful defense mechanism. External attributions are protective against low self-esteem and internalizing disorders such as depression. Managers are, quite literally, caught in the middle and it affects their psychological and physical health.

Middle managers have an increasingly varied range of responsibilities, with long working hours and rising performance expectations, playing key roles in operational and human resource management, mediating between the front line and top team, contributing to strategy, innovation and change.

Researchers at Columbia University, of nearly 22,000 full-time workers (from a dataset from the National Epidemiological Survey on Alcohol and Related Conditions), saw that 18 percent of supervisors and managers reported symptoms of depression. For blue-collar workers, that figure was 12 percent, and for owners and executives, it was only 11 percent.”

Middle management is part of the chain of command whose role is to take in generalized orders from senior management, preoccupied with zero-sum competition for authority, and translate them into less-general, more specific tasks to be performed by those lower down on the pecking order. Very tall hierarchies can have more than two levels that call themselves men in the middle, receiving sympathy and media attention.

The big difference for middle management, we respectfully call tweeners, is that the workforce is totally and exclusively subordinate to the keystone level. The tweeners can express their druthers and make threats to punish the workforce, but the front line workers can only do what the keystone leaders design and assign. The foreman is always close by, keeping track of what is and what is not going on at the work face, cheek by jowl in a master/apprentice relationship, a very old and  successful social arrangement.

Few middle managers have any idea of the unbreakable bond between the foreman and his reports.  What they do know is that top management abuses the workforce to create class distinctions. It is part of an endless zer0-sum competition for authority.  In truth the keystone holds the bulk of social power, accumulated by his performance, to get positive things done and goals attained. Only the keystone has ground truth of workface status, face to face with his men, on a real time basis.

The plight of middle management is real. The tweeners are constantly in competition for a limited number of senior management positions and when an opening comes, the CEO is inclined to bring in an outsider. Why? Because the CEO knows his leadership system has intentionally trained his tweener staff into a helpless, powerless state unable to get anything important done.

It’s hard to believe, but in recent times top management has decided, because of poor tweener performance, caused by the CEO himself, to be eliminated. In 1910, F. Taylor decided to kill the foreman/keystone level with “functional management.” Many attempts to do so made over the next 25 years were all dismal and costly failures.

The tweener level is just as impossible to eradicate, but the head shed hasn’t failed enough yet to abandon the scheme. The nominal time it takes to abandon their failed schemes:

The best bet we know to help the tweener handle his stress is to form a coalition of joint affairs, with the keystone level. While the keystone man in the middle retains veto power, the coalition is able to make more significant improvements in productivity and competitive advantage. The current Eastern European war illustrates the advantage of self-directing front lines soldiers on a national scale.

It is important to factor-in that middle management functions in a sea of corruption at all levels of the organization. Any level of the organization that engages in zero-sum competition for authority is destined to corruption, especially when everyone else is into it as well. The workforce withholds efficiency, called Ca’canny, while the head shed is lining its pockets any way it can devise. Everything in deep-state Washington, DC is corrupt, protected by a two-tier legal system. That is why, exactly, it can’t solve the problems it cannot duck. Individuals who don’t join the corruption are socially marginalized. The 2nd Law takes care of the outcome.