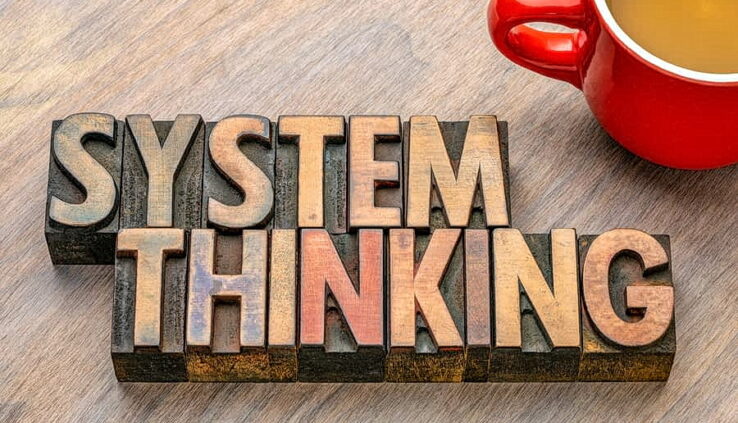 Only “system think” can give you the choice ↓

There’s no other way to exercise your inalienable rights.

All system definitions are eroded by the 2nd Law.

System: a set of two or more elements that satisfies three conditions:

Planning is uppermost in the complex and difficult intellectual activities that man can engage. It is predicting the future and preparing for it – in a technologically feasible and operationally-viable way.

Doing it poorly, like COVID, brings fractal and lasting consequences and misses opportunities. Planning is a decision-making process, special in various ways:

Its purpose is to arrive at future states which will not happen unless something is done ahead of time. It takes pains to avoid bad choices and to exploit developed knowledge. The wider the collaboration the better will be the prediction.

The longer the effect of a plan and the broader its scope, the more difficult it will be to undo. Strategic planning includes the formulation of goals and the process by which they are to be attained. The plan of action can be no better than its forecast of the future when it makes up its mind. We validate the Franceschi Fitting early in the planning process of prediction and preparation.

In predicting the future, the last resource to employ is your intuition. Unfortunately your intuition is always the first “system” to make your choices. In planning, subconscious mind imperatives are vetoed in the womb.

Sets of attributes and imperatives

Generalization is law-like. Particulars are fact-like.

An example of system think

Working towards primary cause of today’s social dysfunction – far back in time to now. Starting the logic with social conditioning, unchanged since the Stone Age. Every generation is taught:

As civilization inexorably grows more technologically and structurally complex, the gap between invariant social conditioning and the operational reality widens at an increasing rate. Yes, it’s like the expansion of the universe by dark matter.

Sometime in the late 20th century, the inflection point was reached where social conditioning prevailed over the reality of social life. No longer could enough victims of mal-conditioning rise above their victimhood and become reality-centered producers..

The new generations decided the intellectual effort and commitment required to escape the dungeon of organizational dysfunction (OD) was worse punishment than the torture of staying put. At the same time, the social status of the reality producers (performance) was devalued when the population majority (consumers) went with social status by authority (opinion), reality-denial. As the ratio of reality deniers to reality embracers increased, the dominant trait of society locked in to autocracy.

Having the answer in hand, little effort is needed  to realize that a piecemeal approach to the ills of OD could never get to ground zero.

As authoritarianism and autocracy hold sway over the quality of life, the pattern of insecurity, unhappiness, and powerlessness spreads and overtakes the governed masses, who form a baitball for self-defense – making them easy prey for the engulf and devour convenience of the ruling class.

Is yours a system problem?

There may very well be no greater blunder made in dealing with significant matters than to apply reductionist, piecemeal attention to components in a system-controlled issue. The consequences for making this error are automatically reinforced by the Nash Equilibrium. Trying to fix what is in reality a system issue by “fixing” its components is a total loss, a sunk cost. Every success in one area is reversed by reactions initiated by people in the other areas. Everyone has examples of this scenario in their own experience.

Exploiting this universal defect is the a mainstay of the insurance empire. Like the pharmaceuticals, insurance wants you to keep your efforts focused on the pieces and parts so your risk of being uninsured, unmedicated, will never diminish. Measuring the change in insurance premiums over time is a sure-fire way to distinguish system matters. Component problems get resolved and disappear. System problems are immune to reductionistic practices.

The important fact to keep in mind when choosing task action to take for system issues is that reductionism doesn’t work. That is, if you can determine is the matter at hand is or is not a system problem, any and all efforts you expend engaging components of the system will be futile, a lost cause. All alternatives fail, no part scores are possible.

Understanding that reality and respecting its lessons will, by itself, reward your investment in learning some system think. You can witness the wasted efforts of those who attempt to defy the laws of nature every day. What else is in the news but examples of treating system problems as simple cause-effect affairs? Note that in every case the reaction to inevitable failure is to double-down with what has proven to fail.

The first step in evaluation is to look for the trappings and scat of “system.” The sooner you can classify the situation, the more you will save yourself in wasted efforts. Characteristics of “system” matters include:

It is not difficult to classify a problem situation. Usually, if there’s enough ignorance about it to call for classification in the first place, the situation is a system. Deciding not to classify, because you fear the cognitive load, does not change the reality. The result is always a growth in consequences.