Role of the Subconscious 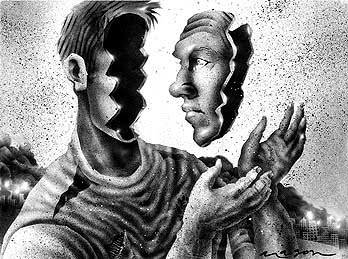 The absurdities, irrationalities, and self-contradictions produced are just another day at the office for your subconscious mind. Science has recently shown your brain’s reality refresh time is 15 seconds. As mentioned, science has also has determined that your subconscious brain comes to conclusions about what you are to do in a centisecond. Don’t wonder why your cognitive machinery can’t make prudent allocations of your efforts.

Our subconscious mind and the social network

The brain of a node on the social network (you) consists of two separate, distinct “minds” – the conscious and the subconscious. Subconscious or unconscious mind, it’s still your brain powerhouse. This bifurcation of intellectual functionality is highly significant to MitM health. Essentially all of the communications circulating over the entangled social network are conducted by biased, irrational, fast-acting subconscious minds. The invariant genome of humankind took evolution three million years to get Homo to the Stone Age version we share today.

Your consciousness mind takes time to test and consider the relevant facts and produce a logical choice of task action. Your 10% conscious mind, capable of study, reflecting and rational thought, is far too slow for playing in the social sandbox. To the network buzzing with make-believe, implementation truth and logic are seen as setting intolerably bad examples for social interaction. The conclusion that we are simply actuators for executing subconscious-mind imperatives, however, is premature. You have veto power, but it’s on cognitive manual, not on automatic. Cognition is a glucose glutton.

Because it imagines everything from a memory full of garbage and dreamed-up narratives that it overwrites daily, without bothering to gather facts or use formal logic, it is delusional (false, fixed beliefs). Because it traffics in GIGO, our rambunctious subconscious mind is grossly incompetent in many aspects of appropriate social behavior and prudent choice-making. In other words, garbage in produces garbage out (GIGO). It works too fast to be reliable or rational. That your intuition is fast but very unreliable is settled science.

The higher we get above the mentor line, the more we appreciate the key roles cognition plays in systems-think and the process of elimination (POE). We recognize what it can do for us as well as what it can do to us. Each of us is alert to ways to get our subconscious mind to allocate some of its power towards solving the problems we can’t solve with our conscious mind. The best strategy, at this time, is to spend the day loading our minds with evidence and facts and objectives and hope the subconscious mind makes a dent on the complexity while we sleep. The thought that we have any supervisory control over our subconscious minds is ludicrous. Obviously, the various meditation practices in use don’t work on technically complex matters. Otherwise meditation would be taught in engineering university.

To protect you from burns, it will reflexively pull you away from the flames. To protect itself from the truth when the operational reality exposes its make-believe, it will throw you, itself included, under the bus. Fortunately, Nature has provided a means for you to compensate for the loose cannon, ready, fire, aim, in your cranium. You can veto acting on the screaming imperatives gushing out of the subconscious mind to create time for triage of those imperatives of task action.

To your brain, the contrast between running on subconscious autopilot and functioning on intense, protracted cognition is dramatic. It’s basically blanking out the teleprompter screen while you are running on your conscious mind.

When your subconscious mind is telling you what to do and you nobrainer comply with whatever is posted on your cranium’s teleprompter, degrading productivity is on Plan A automatic. The powerful part of your brain is always in reality-oblivious mode, where intent (what you want) is overwritten by natural law action (what you get). Attempts to defy natural law create and amplify the mess now on the world stage. Reality denial is a borrowing of trouble and indifferent Nature will deliver the consequences.

Improving productivity requires a large, running commitment of cognitive effort and physical work dictated by effective entropy-reduction methods. From fact gathering and validation to innovating a candidate solution and testing it out, it’s an all-out effort for the conscious mind. Your subconscious mind does not engage the process of elimination, a critical success factor in all productivity improvements of a social system. Any relevant information it uses comes from an untrustworthy memory bank and any missing information it needs to execute the program is made up on the fly.

How can I know what I think until I hear what I say? Rudolf Starkermann to his apprentices

We have great admiration, gratitude, and respect for our subconscious mind system. It and it alone is the big-pharma that feeds our shameless addiction to the healthy hormones, like dopamine and peptide oxytocin. However, when it comes to allocating our efforts, little gets through to implementation that hasn’t been checked out by our 10% conscious minds. Vetting the stream of imperatives posted by the 90% subconscious mind, gatekeeping, takes whatever time and energy it takes. Gatekeeping your subconscious is essential in reaching good health and GYAT status. Taking the path of least organizational resistance, obedient to authority, acting on subconscious imperatives, is express service to calamity. Instead of troubling itself with fact-gathering, thinking, and logic, the subconscious goes with nobrainer groupthink. With business-as-usual taking the place of rational thought, the issue is not about landing in hell but the speed in arriving there.

Since the thinking of MitMs has to be realistic, rational to be effective in implementation world, confront the truth about what has been learned about the unknowable subconscious. Its unalterable characteristics are why, exactly, it is essential to gatekeep your subconscious imperative display monitor. Your effort is all you can control but that is enough to endure the madness. Treat the idiosyncrasies of your subconscious mind as a constraint, not a barrier. Every implementation of the fix finds the transposition taking place in a moment, one that everyone engaged remembers in his own way.

There are several natural laws that apply in full to communication systems and control systems of all ecosystems that must be taken into account. The calamity of OD takes hold because the network of subconscious minds comprising a social system is indifferent to Nature’s laws. It fantasized its narrative to justify its choice before it went to your subconscious/conscious interface teleprompter.

The properties, physiognomies, and limitations of your subconscious mind

It’s interesting that the field of social psychology keeps adding to the list of cautions and warnings about the untrustworthy subconscious mind. Science never finds anything reliable about the subconscious that’s useful to engaging reality. Fortunately, research has taken intuition out of the sociology toolbox, e.g., and nuked it. The supremacy of intuition and gut feeling in social behavior had a long run as a substitute for the labor of thinking. Potentates proclaim possession of the most common of the common senses and you obey their groupthink creed, ignoring your own sense of reality seen with “your lying eyes.”

Dozens of different defense mechanisms of the untrustworthy subconscious mind’s bad choices have been identified. Some are used more commonly than others. These psychological responses are not under a person’s conscious control. That means you don’t decide what you do when you do it. Here are a few common defense mechanisms:

In the social system we have inherited by genetic endowment, it is most unfortunate that you cannot learn from our mistakes, only your own.

In truth, because it is indifferent, the subconscious mind can be a powerful ally, especially is the arena of creativity and innovation. It takes awhile to accept our subconscious minds as they are, but it comes with Plan B experience.

It is imperative to understand the huge role of the subconscious mind, a GIGO factory, in choosing your efforts and the speed by which it chooses. The inescapable fact about health determination is that the subconscious mind completes the computations much too fast for any kind of input validity checking or processing logic review. If you will but focus your attention on speed of response, you can learn to tell choice-making by intuition and from thoughtful risk management. Why so fast? Think Stone Age conditions.

Our Stone Age genome considers measuring the psychological state of interlopers, man or beast, as urgent business. The no-brainer use of intuition to measure health and trustworthiness in others takes place in less than a centisecond.

In these turbulent, unprecedented times, reflexive choice-making is the borrowing of trouble. Your intuition is so loaded with blind spots, biases, and false assumptions that any choice it makes is unreliable. If you proceed burdened with high anxiety anyway, trust building is impossible. Your “true” status is read by others before you can blink. Game over.