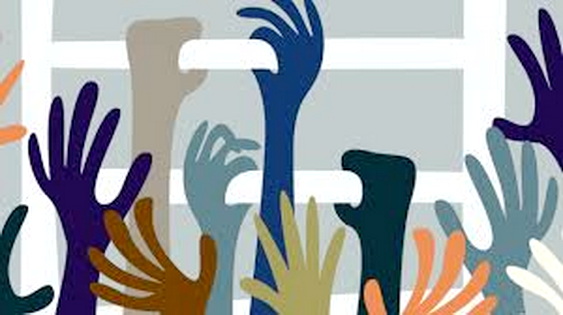 A Blinding Glimpse of the Obvious in Organizational Behavior

That the organizational behavior of a tall hierarchy is an extremely complicated matter, is indisputable. Even the social behavior of a cohort of four people has a hundred loops of communication to track. To deal with the complexity of social system dynamics requires a system-think perspective. This page presents the simplest explanation for social behavior we have devised that has held up over time. This structure can serve to forecast the trajectory of your target collective.

You will have to use your conscious mind, your cognition. Your powerhouse subconscious mind cannot handle the complexity cause by disturbances. It does a table lookup and if it finds a gap in logic, your subconscious fabricates information to close it.

All the ignorance and misunderstandings of the dynamics of hierarchical organizations are caused by a species-wide failure to use “common sense” and the operational reality in running their larger social systems. They bet the sucker’s bet that the Plan A herd can outsmart mother nature. Our government is filled with reality-denying politicians who create problems for society they cannot fix. And, these menaces to society are voted back in as authoritarians. Who’s calling who stupid?

This gap in human intuition can be observed in the history of the earliest days of civilized living, society ruled by a hierarchy – the only way humans could become “civilized.” No one noticed that the decline part of the rise and fall cycle of our civilizations was a free choice made by the ruling class of the hierarchy laden with values of social status that came before survival of the organization, way before.

This propensity for self-destruction shows up in every hierarchy >3 levels. The more tall hierarchies composing a society, the more organizational dysfunction (OD) and corruption there is in the government, reducing the security and stability of the population at large. Corruption blocks a square deal for the workforce. The proof of that claim is simple.

When organizations become >3 levels, two laws of Nature combine with plain arithmetic to bring the social system to ruin.

The rest is grade-school arithmetic.

Since we know the menace of OD has existed without interruption since the last ice age, it is assumed this blind spot in common sense is coded in our Stone Age genome.

While the two iron laws are common sensical, on exhibit everywhere, and the math is just arithmetic, watching hierarchy after hierarchy, millennia after millennia, going down the bunny hole of OD has us convinced that the causes of OD are many, universal, and deeply rooted in our subconscious minds, demonstrably so.

It is somewhat astonishing that billions of humans suffering from this menace have, for millennia, been ineffective in fixing this self-imposed and unnecessary unnecessary curse on themselves. They deliberately remain ignorant of the dilemma and its remedy to this day. The fix is quick, cheap, and win win for all. We concluded the ruling class does not want its workforce to flourish. How better to account for the facts of today’s ridiculous reality? POSIWID The purpose of a system is what it does.

POSIWID stands as a bald fact, which makes a better starting point in seeking understanding than familiar attributions of good intentions, prejudices about expectations, moral judgements, or sheer ignorance of circumstances. Stafford Beer 2002

The two iron laws that channel the behavior of a hierarchy are on exhibit everywhere. Since the Establishment has gone out of its way to see that the population knows nothing about them, consider this a silence-breaking occasion.

This structure of functionality covers the translation of the head shed “vision” for the company, its paramount goal, into task actions the work crews can execute towards that end.  Every level in the hierarchy, each with its own unique vocabulary and syntax, participates in this process. Very few levels recognize their contribution.

The translation of primary and generalized functions into physical functions is the one step in the process that always requires the knowledge and creativity of an individual mind. Every other step in translation has precedent and rules for guidance. The generalized functions sent down from middle management point nowhere. In civil engineering, the engineer who performs this translation is called the “Engineer of Record” and his responsibility for the outcome is absolute and enforced by tort law as a condition of his state license. It is a legal responsibility he cannot delegate.

Once the physical functions have been mapped out by the creators on the process flow diagram, the translation into part numbers and task actions is straightforward standard practice, usually running on established precedent set by the respective disciplines.

When this key step of creativity is defective or informal, it places absolute control of organizational productivity in the hands of the foreman, the “man in the middle” between the front lines at the workface and the chain of command anchored in the head shed. He is the only one with the social power to do good for the organization. He reports to no one for his choices in his daily design and assign role for his reports. Since his supervisor is too remote from the workface action and above the 2½ Rule, he is left to count production as his report up the ladder of authorities. The head shed is satisfied with this ubiquitous practice until a crisis develops.

Everyone knows the 2½ Rule, in part, from playing the telephone game. It’s there in social media big time as well. This iron rule, stemming from applied control theory to social behavior performed by Rudolf Starkermann in 1961, states that under ideal conditions, good quality, pristine, timely process information can only traverse across 2½ levels of the hierarchy without turning into garbage. The rule applies to the chain of command in both directions.

Each level in the hierarchy spontaneously forms its own unique vocabulary, acronyms, and syntax appropriate to its functional role. For the CEO to talk to the revenue crew in terms of his corporate vision is to alienate the workers. His impact is counterproductive to his stated goal.

Because the 2½ rule collaborates with the Franceschi Fitting, it is necessary to pay close attention to the quality of information being transmitted across level interfaces.

Arithmetic of the hierarchy

The organization of the hierarchy population is a nobrainer. The provided organizational chart has it all. An organization of 500 individuals will have a workforce of about 400. The work crews are given task actions to execute, designed and assigned by a foreman, who has a host of other functions he is responsible for within his role as front line leader. He works in close proximity to his reports cheek by jowl at the workface in a master/apprentice relationship. When we count the keystone level as an integral part of the workforce, it alone controls the task actions of >85% of the organizational roster. That’s social power you can take to the bank.

Control of the prosperity of the corporation is located entirely at the foreman level. The only power possessed by the head shed over the corporate roster, and it is a legally-safeguarded power, is to threaten and punish the workforce revenue crews. The total authority of top management to do as it wishes does not translate into power to nudge the organization towards prosperity because it can never know which way that might be. The data that works is too local, particular, and fleeting.

In practice, what the foreman reports to his supervisor must be severely truncated to fit what the supervisor can absorb and still leave room for the other reporting foremen. The supervisor has to compress all that information into language his manager’s level can understand and use to inform their superiors. Information to guide productivity improvements quickly gets lost in the translations.  Unavoidable.

The organization goes dysfunctional when its rulers, stricken with the imposter syndrome, subjugate and punish the foremen/keystone level. The most counterproductive action anyone can take. Let the structure of the hierarchy be your guide. Count squares.

Specifications of the fix, pre 2013

At some time in the history of the universe, there were no human minds, and at some time later, there were. Within the blink of a cosmic eye, a universe in which all was chaos and void came to include hunches, beliefs, sentiments, raw sensations, pains, emotions, wishes, ideas, images, inferences, the feel of rubber, Schadenfreude, and the taste of banana ice cream. David Berlinski

Some of the distinguishing characteristics between Plan A and Plan B are simple and foolproof.  If the operations of the collective involves any losers, it’s Plan A. If there are only winners, it’s Plan B. Adam Smith pointed that out in 1785.